Problem Solving for Better Health in

The Baltic Programs Office (BEPO) of ECOLOGIA coordinates a direct grant-making program in .  Created and funded by the Dreyfus Health Foundation, this "Problem Solving for Better Health" program focuses on helping applicants maximize their effective use of non-financial and local financial resources. The program also plays an active role in enabling applicants to find new, effective ways to achieve their goals. 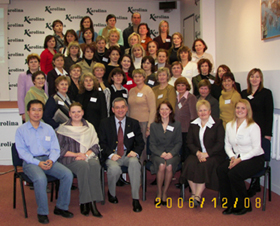 Actual grants are provided only when an applicant has shown that he or she has maximized the use of all other resources.

To train health professionals to create lower-cost and more realistic, results-oriented projects.  To help people better help themselves with local resources, and to be self-sustaining in their solutions.

To date, a total of nineteen countries have participated in Problem Solving for Better Health.  The Baltic Ecological Program Office (BEPO) coordinates this program in

The focus of this program is on improving human health. Topics addressed in the Lithuanian program in recent years include mental health, sexually transmitted diseases, organ donation, drug use, health of the elderly, diabetes, and environmental safety. To view descriptions of all the projects approved in a given year, see the links at the end of this page.

ECOLOGIA also connects people in  who have attended different workshops so they can share expertise and spread their projects more widely.

PSBH in has a two-sided review:

Projects that are approved by both groups receive funding.

Money is given in two parts: the first part is to start the project, and the second part is given when the recipient provides an interim report.  If visual results are available, the Baltic Programs Office’s PSBH Program Director visits the organization to see what has been accomplished. A final report is submitted within four weeks after the project is completed.

Up to this date, ECOLOGIA had not had any disappointments in terms of money not being used appropriately for a project. The grants are not large, so people who want to get something for themselves out of a project simply do not apply. Small grants are very good from the point of view that one should realistically plan activities and budget money carefully; small grants teach people how to behave with the money while trying to get the best results.

PSBH is a program started in 1989 by the Dreyfus Health Foundation in .

In the year 2000 ECOLOGIA's Baltic Programs office (BEPO) became the Lithuanian coordinator of Problem Solving for Better Health (PSBH).  The program has been run each year since then, with one workshop and grant-cycle per year.